I woke up several times during the night to check on the mountain. It was pretty amazing – it was the dead of night and yet the mountain could be seen against the dark-blue moonlit sky. And there were no clouds – we might be in luck with the sunrise today.

The skies were still clear at 6.30AM as the sun started to come up. It was brilliant. Today we dressed a bit warmer – which meant windcheater over the pyjamas and bathrobe, beanie, scarf and gloves. I’m sure we (I) looked ridiculous but wth. In contrast, our neighbours on the left (a smiley older Chinese couple), were on their balcony all dressed up for the day, in their hiking gear; and our neighbour on our right, a young bearded chap, was on the balcony in his underwear – and socks.

The sunrise was quite brilliant, and there was much excitement as the sun’s rays slowly fell on Mt Kazbegi’s peak, setting it on fire. The whole spectacle didn’t last long though, and soon the sun was high in the sky – a ‘normal’ sunny day with blue skies and snowy mountains (like I see this everyday…).

Fortunately, we’d told Nino we’d have a slightly later start today – so we didn’t have to rush through packing, breakfast and checking out. We had plenty of time to sit in the lobby and do some mountain-gazing. Most of the snow on the hotel’s deck had melted and it looked very different from yesterday. How lucky to have experienced such contrasting weather on both days – a two-out-of-two stay.

As we drove down from Kazbegi, the skies were an amazing blue and the snow almost blindingly white. We stopped to take some happy photos of us in the snow – just off the side of the road – nothing as adventurous as the trekkers we spotted in the distance, looking like ants as they trudged towards Mt Kazbegi. 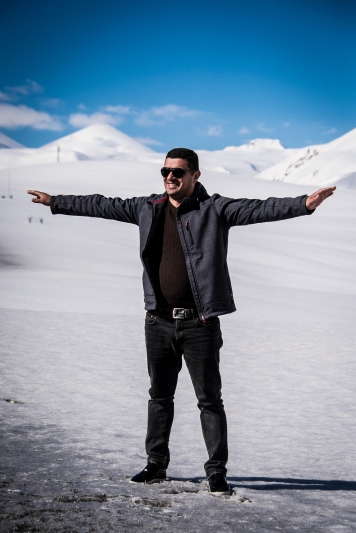 Today, the Russo-Georgian Friendship Monument could be seen much more clearly – so different from our drive up two days ago!

Ananuri – The Fortress That Almost Drowned

It was a good call to have given Ananuri a miss the other day – today was a much better day to make that stop. I thought it was quite unusual that this 11th century fortress with its attached churches was built in a valley and not on a mountaintop like most of the others we’d seen – and so, for a change, it was a downhill walk on a cobblestoned path to get to the complex. Apparently its valley location was because it was built on the main route between Russia and Georgia – and so no one could get through unseen. Oh, and also for a change, Ananuri is not a UNESCO World Heritage Site…but it is on its ‘tentative list’. 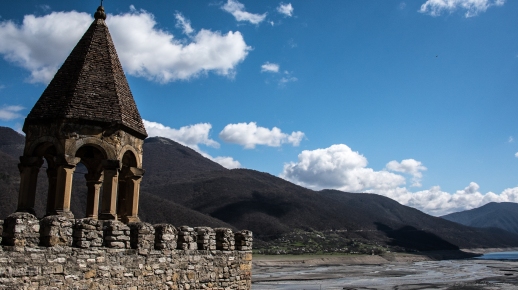 In the ’80s, the Russians decided to build a power plant and a dam – which promised to submerge the fortress and churches. There was much protest and, surprisingly, the Soviets listened – they made adjustments so that the water level of the Zhinvali Reservoir was reduced and the fortress preserved.

Here too, many of the old Georgian frescoes had been whitewashed over by the Russians. In recent years, restoration work has managed to remove the layer of paint to reveal some remarkable frescoes underneath.

Many of the original Georgian-style paintings had also been ‘restored’ – and now were a completely different Russian style. The difference, as Nino pointed out, was that in the Russian style, Jesus and the saints were depicted as more ‘real people’ – someone you “might meet on the street” (a nice thought!) whereas in the Georgian style, the paintings were more 2-D and less of a likeness of ‘real people’ – more ‘higher being’-like. Looking at the paintings I could see what she meant – the Georgian faces were flatter and more ascetic.

A Stalin-esque Visit to Gori

We had a very good lunch of vegetable soup, salad and grilled fish on a skewer (there was a technique to get the fish off – we all did well after Nino’s demo).

Our next stop after lunch was Gori, whose claim to fame was being the birthplace of Joseph Vissarionovich Jughashvili, aka Joseph Stalin. I didn’t know before this that Stalin was born in Georgia! It seemed like a nice peaceful little town now but it was the scene of some heavy fighting during the 5-Day War between Russia and Georgia in 2008 – some of the buildings were pockmarked from bullets.

The highlight of our time in Gori was the visit to the Stalin musuem – it had loads of photos and documents…from Stalin’s birth all the way to a chamber with his death mask. Unfortunately practically all the descriptions were in Russian and Georgian and it was a ‘museum must’ to engage a guide (even though we had Nino with us). The guide assigned to us seemed to have been transported from a gulag.  This blast from the past babushka ran a tight ship; she carried a rotan-like switch (might’ve been a pointer), and whenever Shobs or I dallied at an exhibit, she would sigh (loudly) and hit it against her thigh – which had the intended effect of hurrying us to catch up with her, in case she turned the cane on us.

Our Gulag Girl was a Georgian guide (the English-speaking one wasn’t available) – so whatever she said had to be translated by Nino. Nino’s translations were much longer than the rather short pronouncements by Gulag Girl – I suspect Nino was giving us a much fuller picture…I think GG also realised this and began to interrupt Nino’s translations when she thought she might be providing additional info. At one point, S and I had to avoid all eye contact with each other lest we burst out laughing…might really get caned for that.

In our accelerated breeze through the museum, trying to keep up with GG, there were some key takeaways :

Outside the museum, Stalin’s (bullet proof) train carriage had been preserved, as had the house in which he’d been born – the very modest little house (in which Stalin’s family occupied just one room) was now cocooned within a mausoleum-like marble structure. Bit of trivia courtesy Nino – Stalin was always seen in formal clothes and long sleeves, often with his left hand inside a pocket – to hide the fact that his left arm was shorter than the right, and his left hand deformed – a result of a childhood game of ‘chicken’ gone wrong; this game involved lying down on the road as horse carriages approached, then moving away at the very last minute.

The house of Stalin’s childhood

Uplistsikhe – not quite Coober Pedy

Uplistsikhe, or Fortress of the Lord, the 4,000 year old cave town was a thriving political

and pagan centre for about 3,000 years – till Christianity came along, and towns like Mtskheta and Tbilisi gained prominence. It was home to about 20,000 people and had pretty much everything  – from a pagan temple, and later a church, to an apothecary, a bakery and a prison. The prison was a well-like structure with a covering at ground level – and was located near what seemed to be the main thoroughfare (a rocky path actually); this was designed for maximum humiliation, for as the residents walked past they could peer in and see the prisoner – and hurl insults (or whatever else they wished) at him. I couldn’t help but feel sorry for the prisoner…quite poor thing.

The apothecary with wall storage

As we manoeuvred the rocky paths, we heard…Malayalam…a family of four was ahead of us. The son, probably about 12 or so, was Not Happy. Long story short, he wanted to see the “secret tunnel”, that was the “only reason” he’d agreed to come to “this place”, and now they’re not seeing the tunnel. Mum pretty much said “no tunnel funnel business” (I paraphrase) and boy just stopped short of running away from them – it was a narrow path between boulders, and there was not much space to run.

We eventually got to the ‘secret tunnel’ – it probably was the easiest bit of Uplistsikhe to navigate as it had proper stairs and rails. Nino pointed out the original stone ‘steps’ (it’s a bit of a stretch to call them steps actually…they just looked like some slight undulations in the wall of the tunnel). The tunnel was used to get to the river – I can’t imagine the townspeople walking down that sleep slope, let alone walking up again with their water. But then that’s me – gradient-phobic. I did feel bad for the little Mallu boy – I guess mum didn’t realise that this was an easier way out of Uplistsikhe, compared to the way we (and I assume they) had entered, which involved some uphill stuff on the rocks.

It was back to Tbilisi after this. On the way, we passed some neat rows of red-roofed houses – a refugee settlement, Nino informed us. After the 080808 war with Russia over the South Ossetian region, many Georgians in South Ossetia fled to Georgia to escape the ‘ethnic cleansing’ that was part of this war (yes, a mere 10 years ago). The Tserovani settlement was built to house about 30,000 of them. We passed the junction to the autonomous South Ossetia, with the Georgian checkpoint easily visible, and the Ossetian watchtower on the Ossetian border not far away.

As we got to Tbilisi, we happened to ask Nino about Georgian dancing and if we might catch a performance. A few phone calls later, and after checking that we had something presentable to wear, she got us a dinner reservation for tomorrow, at the Tsiskvili, a restaurant which had nightly performances.

It’s been a long day and we were both quite tired. So dinner was a quick affair at the lounge (conveniently located just opposite our room) before shower and bed …

Gong Xi Fa Cai!
Thank you @ifotoawards for the Honorable Mention [People-Culture] for this series!
Thank you @ifotoawards for the 4 Official Selections, a Silver for The Cuban Boxers series & 2 Honorable Mentions - for the Turkana Life series & Quechua.
“Hello Boat Quay, long time no see”. An unplanned meet-up with friends which morphed into dinner and much conversation by the river. I can’t even remember when I was there last. It was good to see people out and about and the boats/water taxis plying the river again.
~ Portraits from Turkana ~
Very pleased to receive 3 awards at the 2021 Budapest International Foto Awards - Gold for ‘Portrait of a Lizard’ (Nature/Wildlife) and 2 Bronze awards for ‘The Cuban Boxers’ (Editorial/Sports & Editorial/Photo Essay). Thank you @ifotoawards! Thanks too to the monitor lizard that obligingly paused in the spot of sunlight 😀