David Gareja – The Monastery in the Desert

As we said ‘bye to Nino yesterday evening, she said we’d be visiting the David Gareja (or Gareji) monastery tomorrow, about an hour’s drive out of Tbilisi and in the semi-desert region of Georgia. She casually said “wear good shoes” as it’ll be “quite steep”. Steep?? Alarm bells. If Nino said it was “quite steep”, it’d probably be a vertical mountain face.

I thought it was time to do some ‘research’ – what I found did not provide any comfort. The reviews or articles described it at best as “a steep, relentless climb…you occasionally need to clamber over bare rock faces on all fours” or, at worst – someone who said that, “..were this in the US, no one would be allowed to attempt this visit without mountaineering gear.” (!!). Oh, and just by the way, there were vipers, so one had to “stick to the (narrow) path”.

On our drive there we asked Nino about the ‘steepness’ – she thought that there were just a couple of parts that were steep. On the issue of vipers, Nino quite casually said we’d be ok if we stick to the paths. What clinched it for me, though, was Gogita’s reaction – with Nino translating, he said that he’d done the climb once some years ago. He had driven some Aussie tourists to the monastery and he didn’t feel like just waiting in the car so he thought he’d go for a walk with them. He was cursing himself as he climbed and when he got to the top he didn’t know how he was going to get down – and once he did get down, he swore he was never going up again. I could so relate to that.

After that, it was an easy decision (for me, at least) – I certainly didn’t fancy testing the Georgian medical system – or worse. So, that decision made, I enjoyed the rest of the drive. It was amazing how the landscape changed as we drove out to the country – it was just beautiful, the layers of mountains, the long winding roads disappearing into the horizon, and the occasional flock of sheep and their herder.

After we drove through the little town of Udabno, the last town before David Gareja, the road literally ended – with quite a final line – and a dirt track began.

The story of David continued here. After the accusation in Tbilisi which resulted in the birth of a stone, David decided to get away from it all; in particular he wanted to go far far away from civilisation and concentrate on God. So to the (semi) desert area of Georgia he went, with two of his disciples, Dodo and Lukiane. In the middle of nowhere, he decided to sit in a cave and meditate. After some days, Dodo and Lukiane broached the subject of food – they were convinced they would starve in the middle of nowhere. But David assured them they had nothing to worry about. In addition to being able to speak to fetuses, David could also speak to animals. Some deer made an appearance and provided them with a steady supply of milk. On another occasion the deer led Dodo and Lukiane a short distance away – birds fell out of the sky, providing them with some protein for a fair bit of time.

And so, out here in the middle of nowhere, a three-level monastery was hewn from the rock. The Lavra on the first level is a working monastery, with the monks’ quarters hewn into the rocks. The cave in which David meditated is still there. There were a couple of monks out and about – one was on cleaning duty, and, in a Nike t-shirt, sweatpants and trainers, was very focused on his sweeping.

The chapel was small and peaceful – St.David’s tomb is off to one side in the little chapel. The other highlight is a quite detailed painting of the whole Sidonia story from Svetitskhoveli – the one where Sidonia was buried with Jesus’ mantle, etc. etc. I still haven’t figured out why that painting was here. 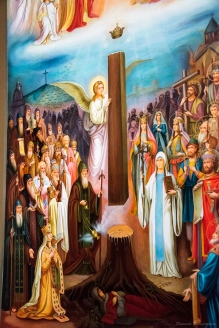 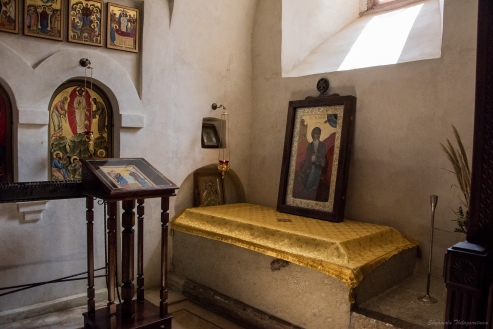 When my fit friend, and our fitter guide, set off on mountainside paths for the upper levels of David Gareja, I returned to the Lavra for more photography, and then to sit for a while in the quiet, and cool, chapel – and said a prayer for Shobs not to fall off the mountain or encounter any vipers. 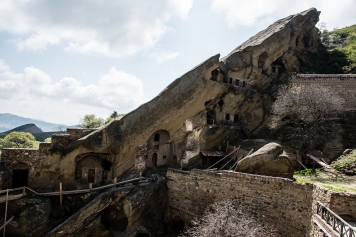 I took a walk down some paths near where Gogita had parked – the landscape was really rather unusual – dry but not quite sand dunes, the hills below the Lavra had an orange-y layered appearance. 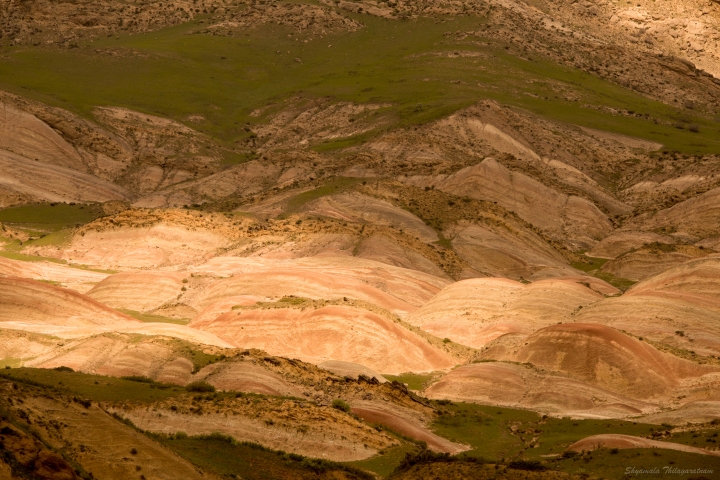 The mountaineers returned safely, one looking a tad more worked out than the other. We were all more than ready for lunch by now. This was back at Udabno, at a little farmhouse. The kitchen was manned by a couple of older women, and a host of younger people. We were trying to figure out how they were all connected – family? It turned out that this was a ‘work away’ arrangement – the young people were from all over the world  – Argentina, France, Poland, etc. They were provided board and lodging in return for their work on the farm, and in the kitchen. They’re “seeing the world” this way…though when Nino asked a couple of them who were serving, they hadn’t been up to David Gareja yet but planned to go on their day off.

One of the boys was celebrating his birthday and we joined in the celebrations. At some point, Shobs said, “Oh to be young again.” – to which one of the chaps very earnestly said, “You can do this too” and added that he’s met some “old people” doing this too while on his travels…ha ha. 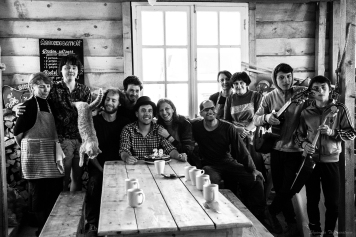 It was a straight run back to Tbilisi after lunch. We lolled for a bit back in the room, then went for a short walk on Rustaveli Avenue. On the way back to the hotel, we saw this on a wall next to a convenience store –

I didn’t notice the ‘Dr Love’ on the bottom right corner till much later. With a bit of help from Google, it seems that Dr Love is a quite famous street artist; his work is mainly in Tbilisi with one piece on a wall in Bristol, England.

It was an early dinner at the hotel cafe, and an early night. There were some mentions of a painful hip – but, of course, this was due to a ‘too soft’ bed, and had absolutely nothing to do with steep slopes… 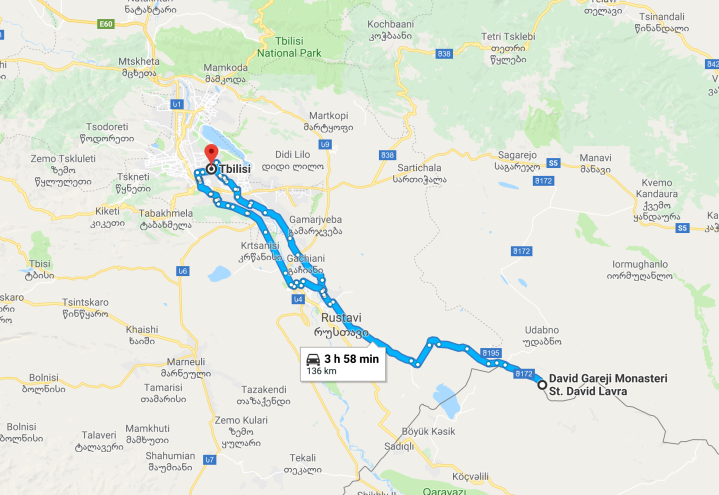