The Orthodox Church of Georgia (and Russia, Ethiopia, etc.) bases its Easter dates on the Julian Calendar – unlike the Apostolic Church of Armenia which uses the Gregorian Calendar. This is how we came to celebrate Easter twice in one week.

Today was Red Friday, the Good Friday equivalent of the ‘other’ Easter, and a day when families are busy dyeing their Easter eggs a blood red. Apparently they use a natural dye made of onion skin and some root whose name I can’t remember now.

Church of The Stone 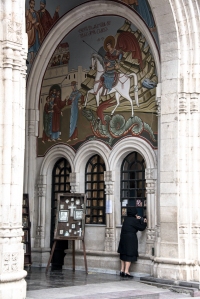 Our first stop today was right next to our hotel on Rustaveli Avenue – St George’s Church aka Kashveti. The original church that stood here was built in the 6th century. As the story goes, a Syrian monk named David Gareja, had come to Tbilisi to preach Christianity. A local woman who was pregnant accused him of being the father of her baby. A horrified David spoke to the baby in the womb and it was double confirmed he wasn’t the father. He then proclaimed that the woman would give birth to a stone – as she duly did. Kashveti translates to ‘stone’ (kva) and birth (shva). Alternative explanation – a calcified fetus? But the original story is so much more intriguing…

As in Yerevan, street art was plentiful – from wall graffiti to bronze statues. As we walked along Pushkin Street toward Freedom Square, stopping at a moneychanger on the way, Nino showed us the Old City Wall. Dating back to the 12th to 15th century, the wall was unearthed while some improvements were being made to Pushkin Street above it.

At Freedom Square, there was the requisite monument – this one looked like it was solid gold – the gold-plating is good in Georgia. From Freedom Square, Nino pointed out a huge modern structure on a hill overlooking Freedom Square; it was all glass and steel. It apparently belongs to a former Primer Minister of Georgia – an obviously wealthy man, his home (with office attached) was partly designed by a Japanese architect. Picasso originals apparently adorn his walls (maybe not the glass ones). 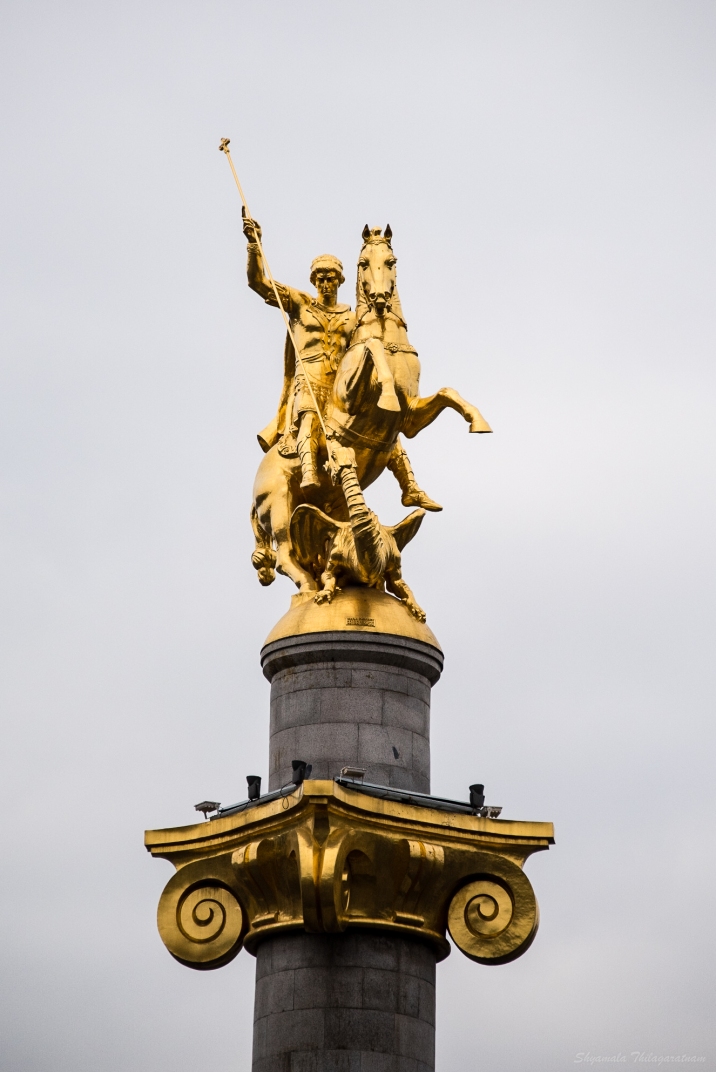 Many of the bronze statues we saw had some link to film or art. There was one of Sergei Parajanov, a quite famous film director of Armenian descent, who was born in Tbilisi and died in Yerevan. He was known to be a rebel who didn’t conform to the Soviet rules of film-making, and was imprisoned several times on various charges from propagating subversive ideas, to bisexuality. One of his more famous films was a biography of the Armenian poet, Sayat-Nova, whose name we’d heard from Katar while we were in Armenia. The film (titled Sayat-Nova) was made at the Haghpat and Sanahin Monasteries that we’d visited in Armenia, and at the David Gareja complex which we were visiting tomorrow. The Russians thought the movie said nothing about Sayat-Nova’s life, censored it heavily and changed the title to The Colour of Pomegranates – which has since appeared on many ‘best films of all time’ lists. It was fitting then, I guess, that Parajanov’s sculpture had him appearing to fly through the air on wings.

Here too there was the equivalent of Mother Armenia – Mother Georgia. While Mother

Armenia held a big sword and symbolised the Armenian women’s role in the various wars, Mother Georgia holds a slightly smaller sword as a warning to enemies, and a bowl of wine, as welcome to friends.

Old Tbilisi was quite pretty, with its narrow alleys and hip bars and restaurants. We did our shopping today – honey, Georgian wine, chacha, churchkhela…so many varieties!

We visited the (outside of) the Turkish sulphur baths, which would’ve looked quite at home in Turkey or Morocco. Off to the back of the baths, was a waterfall, right in the middle of the city – the sulphur smell wasn’t too strong fortunately. 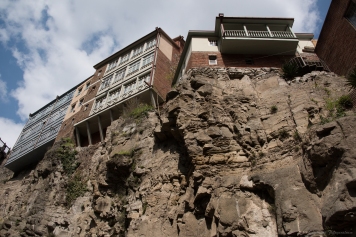 We had a lovely unhurried lunch at the Old Mekethi Restaurant overlooking both old and new Tbilisi. 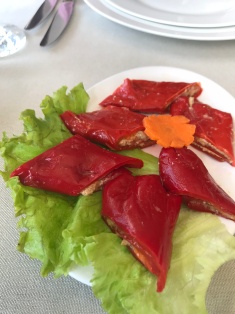 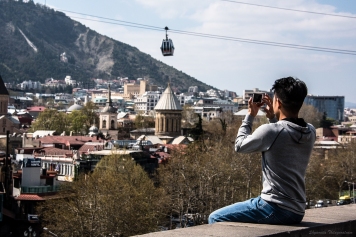 Chatting about family, we got to know Nino a bit better – an obviously bright, and competent young lady. She proudly showed us pics of her handsome husband (a professional arm wrestler!), and told us (also very proudly) about her super smart sister.

There was one experience today that wasn’t all happy and wonderful – an encounter with a gypsy beggar girl. She must’ve been 12, maybe a bit younger – and oh, was she persistent in asking for money. At one point, as I tried to walk away she actually grabbed my arm – fortunately I stopped myself from shoving her (though that was what I really wanted to do – given my frozen shoulder and the pain that shot through when she yanked my arm), and managed to extricate myself sans violence. As I walked away I heard her say, “F*%# you”. Same to you, young lady.

Later in the day, Shobs had her own beggar girl experience when one of them ran up to her, and with her arms practically around Shobs, said something right in her face. I did think there might be some Artful Dodger stuff going on, given that there were a couple of girls behind Shobs too – fortunately, when we checked later, nothing had been taken. Oh well…

On the itinerary for today was a visit to a batique (batik!) studio. Irma Khoperia, the owner of La Maison Bleue, was a lovely lady who obviously loved her art. When she heard that we were originally from Malaysia, she said we might be able to teach her a thing or two about batik. Hmm…I think not, considering my experience with making batik prints dates back to when I was in school. I recall it involved a lot of paint, wax and mess in the ironing room in the Ridgeway house in Seremban.

It was a good afternoon watching Irma at work – she started on a piece with cherry blossoms…there was some ‘mess’ but not at the levels I remember. We got ourselves a couple of scarves, mine with the Georgian alphabet; when we got back into the car, Gogita said, “Schvidobashi” which means, “Let the things you’ve bought serve you well.” What a lovely wish! It could be used to good effect, to take the edge off after a spending spree…

Before we got back to the hotel, we stopped at the Flea Market on the Dry Bridge. This market first started post-independence when cash-strapped Georgians laid out their possessions for sale. Today, there’s an eclectic mix of things – from books and vinyl records, to jewellery, knives and guns, telephones and clothes. The fridge magnets here were really pretty and looked like art pieces.

Tonight was our Tsiskvili dinner reservation. After checking, and double checking, that cabs were safe to take (they are), we got a cab to the restaurant – we had a nice driver called Robert, who launched into how much he likes Singapore when he heard we’re Singaporean. I’ve been noticing this reaction A Lot, both in Armenia and here, in Georgia.

We were at Tsiskvili early, as instructed by Nino yesterday (and reminded by Nino today)…but a rather harried girl, with clipboard and ear+mouthpiece, said our names weren’t on the list. We tried both our first names, our surnames and even Nino’s name – no luck. We eventually resorted to calling Nino who spoke to the girl, after which we were a bit brusquely told to go down the stairs and to the left.

We did – and once again, a clipboard was checked for our names…not there. Finally, a very helpful waitress directed us to another dining hall – Tsiskvili is huge, with several dining halls, including an Asian themed one, and halls for those who want to be away from the dance performances.

A table was found – somewhere in the rafters (there were several levels in this hall) with NO view of the performance. As we contemplated whether to stay or leave, the helpful waitress returned and moved us to another table – still in the rafters, but at least with a sliver of a view of the dance floor below…we just had to lean over the balustrade and make sure we didn’t fall over.

Without Nino to help with the menu, we were left to our imagination, and Google (when the connection worked). We ordered a couple of things which weren’t anything to shout about (horrors! I didn’t think I’d ever say this in Georgia) – my dish was forgotten, and so by the time it came, Shobs had practically finished her meal.

But at least we got to see the dancing – and without falling over onto the diners below. It would’ve been quite spectacular to have gotten a table downstairs. Given that this restaurant is often booked weeks and months in advance, we were grateful though to have gotten this table with the sliver of the view – a bit like watching those movies in ‘panorama’ view on TV when I was a kid.

In between dances, the band struck up some Georgian tunes. On one of the breaks, they switched to English, much to the delight of the patrons. Hey Jude is a clear favourite in Georgia – the acoustics in the rafters can’t have been too good – I swear they sang, “Take a Samsung and make it better…” This was probably the point when we both dissolved in hysterics and decided to call it a night.